Phoria is bringing you a triple headliner this weekend with three of the best trance DJs in the world.

Celebrating his recent album release, 25 Years of Perfecto Records, Paul Oakenfold is going to start your weekend off with a BANG! this Friday. This legend has been around before big room anything was even a fart of an idea. With three Grammy nominations and the title of #1 DJ in 1989 and 1999 underneath his belt, the 51 year-old London producer is sure to bring the heat as he entice old-school ravers to dust off their trance-pants for a night of great music. I mean, who doesn’t remember listening to “Southern Sun” as a kid and wishing that you were in a sea of people dancing. I’m sure we’re going to hear some uplifting tracks, some funky house and a couple of dark trance beats that will satisfy the thirst of young and old school attendees alike this Friday. 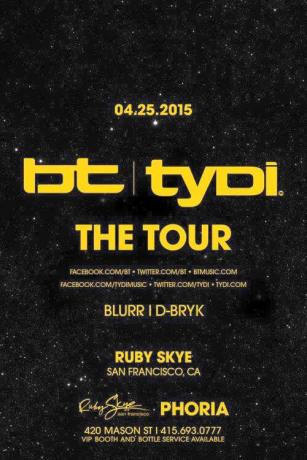 Hope you’re not burnt out because we still have more to go with a double headliner on Saturday with BT and TyDi.

American song producer and electronic genius BT, Brian Transeau, is another Grammy nominated trance legend. Having the nickname “Godfather of Trance,” BT has been there from the start, paving the road for modern trance and electronic music of today. Being well endowed with different types of music (classical, punk, electronic, etc), BT has enriched his sound by working with many different artist (like Paul Van Dyke, Britney Spears, Madonna) and will bring us a type of trance that is sure to satisfy the pallets of every music lover. It’s no wonder that this man has also worked on scores for Hollywood movies and video games. BT is going to confuse your dance moves with his set as he brings all his weapons this Saturday as you face off a musical battle.

It wasn’t too long ago that 27 year-old Australia DJ TyDi was at Slide bombarding us with music from the wheels of steel. Met the guy, pretty cool and down to Earth. But let’s talk about his music. A graduate from the Queensland Conservatorium of Music, this Aussie holds a Bachelor of Music Technology. With titles like “Best Break-Through DJ” at the IDMA and Australia’s #1 Dj in 2008 and 2009, this man is a force to be reckoned with. His sets are a combination of trance and EDM. A sound that’s sure to put a smile on your face as you groove off into the night; this man will not disappoint you on your Saturday night adventures. If you don’t believe me, listen to that Soundcloud link just right about this paragraph. Oh, and his single “Stay,” featuring Dia Frampton, is one to surely touch your feels.

I hope to see y’all this weekend at Ruby Skye for two nights of incredible music!