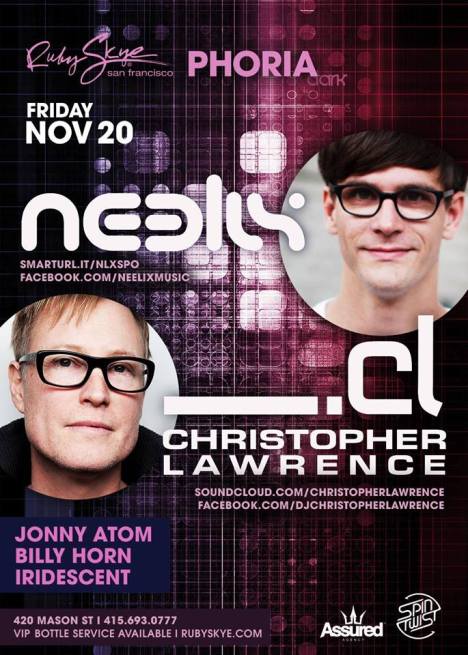 It has been some time since Phoria brought everyone some of the best in trance. So we return this weekend with a BANG! We’re also returning from our hiatus with the dark side of the force . . . Opps, we mean trance. It’s with great pleasure that we present Neelix and Christopher Lawrence this Friday, November 20th!

German native Neelix began to produce music in 1998 and finally released his first track in 2002 titled “The Fourth”. Over time,  he has accumulated an arsenal of productions with a multitude of singles on different labels. Although his sound might steer towards progressive house from time to time, it’s still no short from a psychedelic melody. With use of hypnotizing beats and eerie sounds bites from an old sci-fi movie, his set is unique to his own world. Be prepared.

Christopher Lawrence is no stranger to the world of psy-trance.  The winner of IDMA’s “Best American DJ” in 2011, Lawrence will step into Ruby Skye to induce Phoria with the darker side of trance. The American DJ is known to submerge attending fans with trance that he’s crafted with industrial  techno. If you’re not afraid of quick heavy beats and robot noise, then come on Friday to spend a night with Christopher Lawrence.

Lawrence will also be headlining Dreamstate in San Francisco, on January of 2016, alongside John 00 Fleming! If you can’t wait till Dreamstate to see CL, then don’t miss out on the chance to intimately see Christopher Lawrence at Ruby Skye, alongside the one and only Neelix! If you dare, of course.

Both scary DJs will be supported by sets from Jonny Atom, Billy Horn, & Iridescent!!!